Over the past 2 months I’ve been carrying out research on Oskar Schlemmer and in particular his avant-garde ballet ‘Triadische Ballett’. I stumbled across a performance of the ballet while watching Jean Cocteau’s ‘Blood of a Poet’ earlier in the year and it’s stayed with me ever since.

Oskar Schlemmer was a lecturer at the Bauhaus and head of the stage workshop from 1923 to 1929. The Triadische Ballet of 1922 took form in 3 parts with 3 dancers ( 2 male 1 female), 12 dances and 18 costumes. The first scene is set against a yellow back drop, the 2nd a pink stage and the final scenes in black. Each scene captures a different mood through the settings, costumes and the way the dances are played out against these backdrops. 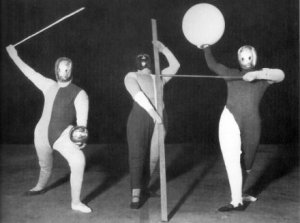 Unlike traditional ballet costumes Schlemmer’s costumes were made to work against the dancers bodies, limiting their movement and their interaction with one another. For Schlemmer the floor and the human body were governed by the same properties, in turn they were made up of the same formal substances. He saw the human body as a 3-dimensional projection of the 2-dimensional floor or wall upon which the dance is embedded. 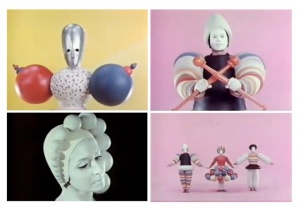